Why India? Yes, a relative few people surf here, a lot of the coast has been explored, and it isn't totally new as a surf destination. However, few if any other places in the warm and safe category that also get surf are untapped like India. You can still surf where no one has before...or at least feel like you're the first. Vast stretches of the coast haven't been looked at by a surfer's eye. Even more have been explored by a few but not given the time it takes to get a place figured out. Good waves happen here, and getting alone for a surf is easy.

This discussion is limited to a 1.5 hour drive north and south of Trivandrum...from 45 min over the Tamil Nadu border up to Kollam.

There are basically two swell directions that hit Kerala.  The first is southerly which may have a hint of west or south in it.  The other is west/northwesterly.  The southerly swell is always there in various sizes and the westerly one is only around from some time in May into early October.  It may show up here and there during the other months, but that's pretty rare.  The southerly one tends to be coupled with a longer swell period (10-20 sec.), while the nw swell originates closer and has a shorter period (5-10 sec.).  When the nw is hitting, the combination of the two swells makes for peaky conditions that are served well by beach breaks.  Lighthouse Beach and the main beach at Varkala are as good a call as anywhere.  If a pure southerly swell comes (with no significant nw mixed in), then that's when all the corners come alive (long peeling lefts).  There are river mouths that come and go, a few rocky bends in the beach, some jetties, and an artificial reef that all tend to like a pure south.  The beach break stretches may produce a bar that handles the pure south well, but they often close out.

When discussing the swell here, it's easiest to categorize it into seasons.

Mid December through some time in May:

The beginning of this window sees small surf.  Still, it rarely gets too small to surf.  Most days are at least a fun, ride-able, knee-to-waist high, and there's still a chance of a bigger day here and there.  While January is considered the smallest month, I got my best week of surf in India in Jan '13 - 8 days strait of solid head high+ waves timed with river mouth sandbars that were formed just right.  This is peak tourist season.  The water is clear.  The weather is nice.

River mouths in this area are usually closed.  With enough rain and swell, they break open and deposit sand in a bar...maybe.  The right shaped bars don't always happen.  If they do happen, it seems to be in this window of time.

Through this 5 month window, the tourist will fade away, the temperature will increase from comfortable to sweltering, and the surf will improve month by month.  The consistent knee-to-waist high days will transition into a consistent waist-to-shoulder, and the likelihood of legitimate swell goes way up.  Even prior to monsoon's arrival in late May / early June, the surf in May runs the risk of having that cross-swell from the west.  All things considered, April is probably the safest bet on catching clean, bigger surf in Kerala.  If you have the flexibility to watch the swell forecast and time your trip with a swell, you'll catch it good.  Likewise, if you come for a number of weeks, you'll get waves.  If you're forced to pick a random week in this window for your trip, late Feb through April is your best bet with your chances improving the later you come.

Late May through August

Some time around the 1st of June, the monsoon will hit.  It doesn't fade in.  It's like someone hits the switch.  Suddenly the air will cool, the wind will howl onshore, and the waves will get way overhead or more.  Big swell from the northwest will show up.  The southerly swell mixed in is typically large, also.  Not much surfing happens around here this time of year.  Occasionally, the wind backs off and the sun comes out during monsoon season.  That's usually coupled with a decrease in swell.  I usually watch the forecast for the swell to get it's smallest (northwesterly 4.5 ft @ 9 sec) and go then.  It will still be well overhead and powerful with a lot of tip-toe drops and all the size I want.  Again, the "smaller" days during monsoon are plenty big and juicy and come with the best weather, calmest winds, and less rushing currents.

Usually, local lifeguards won't let you in the water during this time, so you need to surf away from the touristy spots.  There's one local river mouth that helps shape this big swell from the nw, but for the most part any random beach break is as good as another.  I am yet to find a little nook out of the wind for this time of year, but there are a few more potential spots I need to look at.  The southern tip of India is a two hour (up to 4 on a bad day) drive from Trivandrum.  The big westerly swell doesn't wrap in there too much, but there will also be southerly swell.  It will be windy, but you can get some waves with offshore winds down there.  This isn't the time for a surf trip to Kerala especially for the inexperienced.  It's always bigger than it looks.

September will still be monsoon-like but gets very surf-able.  For the most part, every day will be juicy and overhead without the extreme winds and currents of monsoon.  It's still peaky and best at the beach breaks, as the swell will still be a combo of the southerly and the westerly.  The wind will still be onshore.  Kovalam, with its big rock heads on either side, does well to organize these semi-choppy days.

At some point in late September / early October, the nw cross swell will stop.  From then on, all the spots have a good chance of working with the pure south passing over them.  You will see legitimate good days through this time with the bigger days more likely in the earlier portion of this window.  November rivals April in my experience as the best month.  Early December surprises us every year with a lot of unexpected quality days of shoulder high and above.  The non-monsoon wind pattern is light every morning with the onshores starting late morning.  This Oct-Dec season, however, sees more days than the rest of the year where the wind really holds off later into the day.  The greatest chance of being on good, glassy surf at noon is this time of year. 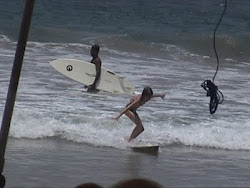